Last weekend, I had one of those events that made me feel very grateful. My wife, Mary Anne and I like to go kayaking on Lake Erie when we get a chance, usually up at Fairport Harbor where our cottage is located. There is a nice beach with a breakwall there, so conditions are usually pretty tame, but last Sunday we ended up having quite an adventure.

We checked the weather forecast and while they said that there was a small craft advisory on the lake, it was sunny and warm out with only a light breeze and chop on the water. We set up the kayaks on the beach and my wife brought our dog, Velvet, who has her own life jacket and rides in the back of my wife’s kayak. We took off and my wife headed out to the breakwall, about half a mile out, which is our usual destination. I had to go back to the beach, to adjust the seat on my kayak, which was set too loose to provide the right back support for me. I then set back out and saw that my wife was way ahead of me, about halfway out to the breakwall. 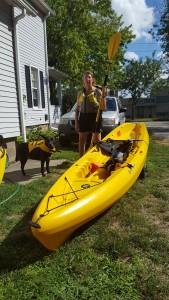 As I headed out I noticed that the breeze had picked up quite a bit and while the waves were still not too high, the wind was making it difficult for me to paddle a straight course to where I wanted to go. I decided about halfway out to the breakwall that things were getting difficult and that I should head back to the beach. I could see my wife in the distance at the breakwall and I figured that she would follow in behind me. About this time the wind backed to the southwest, straight off the beach, and strengthened to a good blow. It was all that I could do to keep moving toward the shore by paddling for all I was worth. Finally I got close to shore and that blocked the wind enough that I could get in the rest of the way. When I had beached my kayak I turned around to see how Mary Anne and Velvet were doing. They were nowhere to be seen! I finally spotted them, they were about halfway in from the breakwall, but they had been blown way East to near the end of the harbor area. I ran down to the end of the parking area to try to get my wife’s attention, I thought that if she came straight in to shore, instead of trying for the beach, that she could make it. She made it as far as a large sailboat that was anchored in mid-channel, and while I could not hear what was transpiring out there, I saw them throw her a lifeline, Then I knew that they were in trouble!

I ran back down the beach and located the beach supervisor and explained our predicament. He said that they had been watching my wife’s progress (or lack thereof) and asked if we needed help. I said yes and he quickly organized a rescue expedition. They rent kayaks at the beach and in case folks get into trouble they have two inflatable “chase boats” with small outboard motors ready to go to boaters aid. He got one out with the help of one of the female beach lifeguards and they soon were zipping out across the waves. The sailboat by then had picked up my wife and dog and was towing the kayak back to near the beach. It was a good sized boat, however, and they could only get so close to the shore, so the chase boat picked them up from the sailboat and brought them back to the beach. 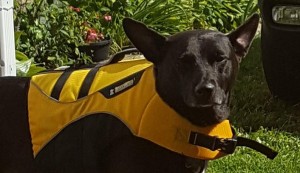 It was a great relief to see my wife safely on the shore again, and while she was exhausted from paddling both her and Velvet were fine. The beach patrol folks did a great job and my wife said that the couple on the sailboat were very gracious about helping out. It really makes me feel good that there are such great people in this world that are more than willing to help someone out when they are in distress. I an sure that we will go out kayaking again soon, but I’ll be sure to check the weather more carefully next time!