One of my standard jobs around our house is creating costumes out of nothing. I guess that this ability was developed when I was in college and we needed costumes for Halloween or various other costume-themed events, but we didn’t have any money to spend on them. It wasn’t listed on the Ohio University curriculum, but it’s turned out to be one of the handier things that I picked up there. 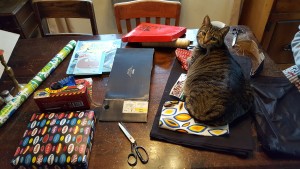 This weekend, for instance, we were invited to our grandson Owen’s birthday party. He’s turning four, so obviously for such a milestone birthday his folks threw a big party with a superhero theme, and wanted all the attendees to arrive in costume (that may have actually been only for the kids, but my wife wanted us to have costumes too!). My “Hardwareman” costume was packed away, and my wife needed a costume too, so I had an hour to create two costumes for us to go in. 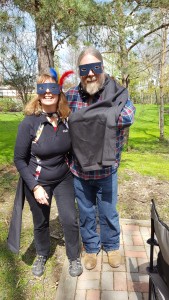 So with some of my wife’s extra shoe boxes (never in short supply – don’t ask!), the folder cover from her last health insurance flier and some black material and ribbon from her Betsy Ross stash, I created “Grampa-Man” and “Grama-Lady” costumes for the two of us (it took a little longer than it should have, James the cat insisted on helping). What are the “Gramps” super powers you may ask? The ability to get grandkids to eat their vegetables, the ability to get them in bed and asleep without a fuss, and many others. We went to the party and great fun was had by all. The children all were in various superhero costumes, and masks were provided for any adults that didn’t come prepared. There was grilled food, cake and presents (more toys???) and a bounce house for the kids. Times sure do change, MY fourth birthday was nothing like that!