Melissa & Doug Is It Fall Back Or Spring Forward?

I Miss My Jeep

This week’s story is kind of sad. It is a reminder of my 1995 Jeep Wrangler, which has been my favorite car. I bought it new and put about 250,000 miles on it before the frame broke and I had to retire it. Since then I’ve driven several different Jeeps and other cars, but none are quite the same. My latest one was a 2006 Ford Escape. It wasn’t quite in the same class as the Wrangler, but it was good transportation. At least it was for about three months until it became the ham in a car club sandwich (right in the middle). I wasn’t hurt, but they ended up declaring my Escape a total loss. The damage was mostly cosmetic, so I bought the wreck back from the insurance company to rebuild it and keep driving it. I have done this before (with another Jeep) and it is a good way to save some money. 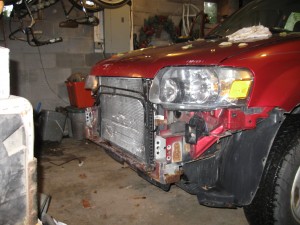 It took a couple weeks to get the parts rounded up and then I got started. First I had to pull the back end back out a little bit. Like last time I used my basic body shop tools; a 6-ton come-along, a ten pound sledge and a tree (to chain the vehicle to). Sorry, but I forgot to take a picture of that operation, but I managed to pull the back approximately into its original shape. 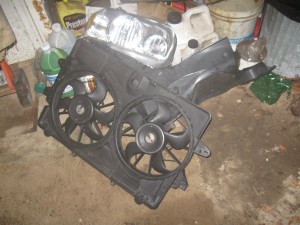 Next I had to take the front apart and replace the radiator which got crushed in the wreck. That is when I started to miss my old Jeep. I changed the radiator in my Wrangler one time, and it took me about an hour. Four screws on the fan cowling, two bolts on the radiator, and two hose clamps and presto, just lift it out! On the Escape (or any newer car for that matter) you have to disassemble half the front end just to get to it. I had to remove the inner fenders, remove the plastic front bumper cover, take out the grill, remove two lower air deflectors, unbolt the hood latch, take out the center support, unhook and remove two electric cooling fans, unbolt and lean out the air conditioning condenser, unhook four radiator hoses, and and then you can just barely weasel the damn thing out. 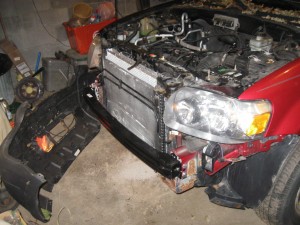 I carefully slid the new one in and then I had to reassemble the whole front end of the car again. Not counting the extra time I spent fixing other damage from the impact, I’d say it took me about four hours (maybe longer!). New cars sure run good, and they get better mileage, but you sure can’t beat an older car or truck for ease of repair. Half the parts that I had to take off weren’t even on my old Jeep, and somehow it still got me where I wanted to go. I guess that you can’t fight progress, but sometimes I sure don’t like it. Now that it’s all back together, I suppose it was all worth it, of course now I’ve got to do is the same thing to the back end, well I suppose that’s life, at the Old Hardware Store… 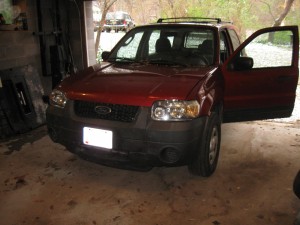