It might seem obvious to those of you that know me, but sometimes I have a little trouble keeping up with the times. I live in an old house, work with old tools and own an old hardware store. I usually fight any new things tooth and nail. Just ask my wife who has been trying (mostly unsuccessfully) to get me to use a cell phone (let alone a smart phone). I like my phones with wires attached to them – Thank you very much! But this week we did do some updating at the store. 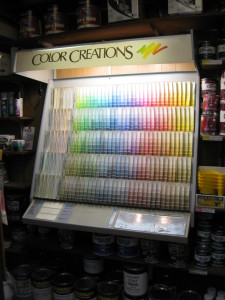 The story goes like this. Our paint supplier Valspar, makes some very good quality paint, but our color chip board that customers use to pick out the colors that they would like mixed has definitely seen better days. I don’ t have any way to know for sure, but I would guess that it dates from the 1970’s. Our supplier tried to get us a new one, but we just don’t sell enough paint to make it worthwhile. They did manage to find another store that was installing a brand new display and wanted to get rid of their old one. Like magic, their old one became our new one and a (relatively) quick trip to central Ohio later, we have a new chip display for Hill Hardware. I would again guess that this one is from the 1990’s, but it sure looks better than the old one.

I really don’t like to see things go to waste so this deal was just up my alley. So, just in time for the spring clean up and painting season, we now have an updated paint department to better serve our paint customers, and so it goes…at the old hardware store.