Some More New Products What’s Your Point? (Three Point, That Is)

I know that we’ve been having a lot of rain lately, but at least it held off on Wednesday night, so that we could fit in the Burton Cruise-In. If you’ve never attended a cruse-in, the idea is for a lot of folks (seems like older guys, mostly) who own older collectible or special interest vehicles, to drive them to a specific spot, like Burton, to basically show them off and hang out. I’ve always liked different vehicles, and although I’m more into old trucks now, I’ve had my share of old cars too. It all started in college, when, while all of my friends were trying to see how “new” a car they could afford, mine just kept getting older. I had a ’71, then a ’62, then a ’52, pretty soon I’d be starting them with a crank. I think that is what I like about them the most. While new cars are advertised for the amount of advanced technology that they sport to basically insulate you from the actual drudgery of driving, older cars don’t do it all for you, you actually have to do the driving yourself. 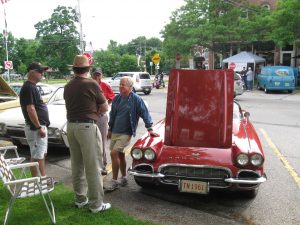 This week’s Cruise-in was extra special because my friend Joe and his brother George brought their cool 1961 Corvette to Burton and parked it right in front of Hill Hardware! I’ve never qualified to be a real Corvette enthusiast, but I have to admit it’s a pretty cool car. That’s mainly because it is equipped the way I think a car should be. First of all it’s a convertible, very important in my book. Why drive a car where you’re sealed into a little metal and glass bubble? Also, it has a manual transmission. I like to shift gears, and I find it really keeps me paying attention when I drive. It’s also becoming a lost art. I’ve seen bumper stickers with a picture of a shift pattern from a stick shift with the legend, “Warning, this vehicle equipped with a Millennial anti-theft device”. 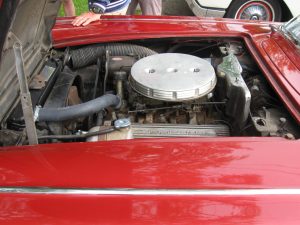 Also since it’s a ‘Vette, it has a powerful solid-lifter V8 with not one, but two carburetors. I know that this is probably pure double-dutch to some of you, but means a lot to us old timers. “Solid lifters” refers to valve lifters, which were used on older design rocker arm actuated valves. Solid lifters had to be painstakingly adjusted every few thousand miles to keep your valves working efficiently. “Modern” cars mostly went to hydraulic lifters that required no adjustment in the mid 1950’s, eliminating that chore. High performance engines, however, stayed with the solid design as it resisted horsepower robbing “valve float” at higher RPMs. Carburetors are the device used before the fuel injection systems that all cars have these days. Carburetors are basically a tube that the air that the engine runs on is drawn through on the way into the engine. The gasoline is drawn into the mix by the vacuum of the air passing by. The amount of air/fuel mix is related to the power of the engine. Single barrel carbs used on small engines only had one passage, double barrels two, and four-barrels four. Joe’s car has dual quads, giving it eight barrels for maximum horsepower. 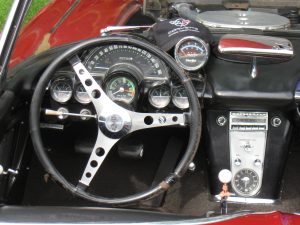 The ‘Vette also sported a full compliment of the required engine gauges. I insist on this. How can you drive a car and not know what your RPMs, coolant temperature, oil pressure, and charging system condition and the like are? Mary Anne’s old Prius just had one check engine light, which, if it came on, the manual instructed you to take it to a dealer as soon as possible to get it checked out. If it started flashing, you were to just pull to the side of the road and call a tow truck, what a system! With gauges, you usually get some warning before something goes horribly (and expensively) wrong and usually a good idea what it might be. I don’t understand how you could build a car without them. 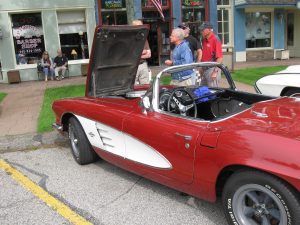 We had a great time at the Cruise in, just standing around and talking cars and commenting on the ones coming down the street. There was a great selection of everything from classic cruisers like Joe’s, to real antiques like ’30’s Packards, muscle cars, modified street rods, old trucks, sports cars and even a Volare/Aspen wagon from my “learning to drive days”. If I can ever set aside enough time and money, I’d like to get one of my vehicles fixed up enough to bring up to the cruse in. Until then, I’ll just have to admire the passing cars, here at the Old Hardware Store… 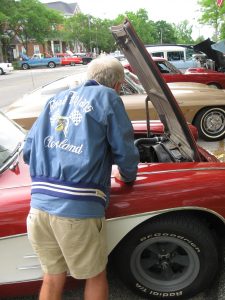