Well, there’s no denying that the holidays are here. We had several holiday shoppers in the store today, and one couple was very interested in our model steam engines. We had a nice talk about them and I showed them several of the ones that we had in stock. If you’re not up on model steam engines I’ll give you a brief rundown. 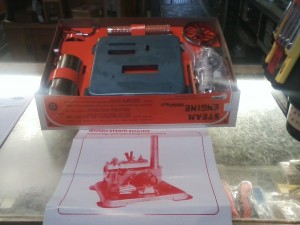 Model steam engines came about shortly after real seam engines in the late 19th century. Everything was run by steam back then, factories, trains, ships and even automobiles. Children’s toys have always mimicked the real world and steam toys were no different. Of course there were many non-functional wooden and cast iron toys available, but if you could talk your parents into it, you wanted the real thing. 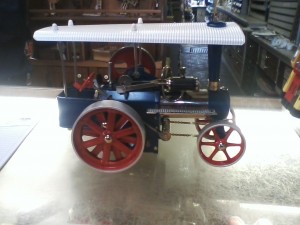 Real working steam engine toys were made by many companies in both Europe and the United States. A few of them are still in business and here at Hill Hardware we still sell them. Making them run is a little more complicated that just hitting the on-off switch that today’s kids are used to. First you have to fill the boiler with water to make the steam. Then you have to fill the firebox tray with solid fuel tablets. You light these with a match and carefully place them under the boiler. Then you have to wait, no instant gratification here! While you are waiting though you have another job to do. Get your oilcan and lubricate the engine. All the shaft bearings and pivot points need a drop or two of oil. And the steam line oiler (if your engine has one) needs to be filled. 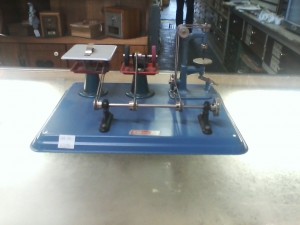 Now do you hear a faint bubbling and hissing noise? That means steam is up, and all you need to do is give the flywheel a little push and away she goes. Just watching your engine run is a lot of fun, but after a while you might want to add some accessories for it to power. A variety of miniature tools and such are available to belt to your engine. The best one is the generator set, an actual working generator that is wired to an incandescent lightbulb. Old Tom would be proud. 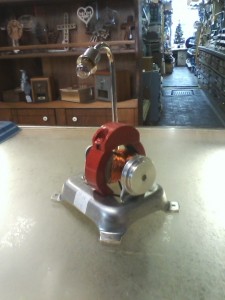 So if you need a last minute Christmas gift for that mechanically minded man (or woman) on your list, come visit us. At the Old Hardware store…