Right Up My Alley Don’t Go Into The Basement!

Art Is My Life

Now that Spring is getting well established Mary Anne said that it was past time for a new window display. The one that we had featured the a maple tree and sap bucket, along with a sugar house with snow on the roof. She said that it was out of season and we needed to update it.    Unfortunately it has been rainy here every day for about a week. As we already have some flamingos frollicking in the other window, I thought that we should have one out for a walk in the rain in this one. Of course all I had to start with was one plastic flamingo, so the rest I had to create. Luckily as I have stated many times “Art is my life”. 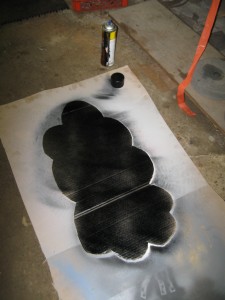 I came up with “Art is my life” when I was in college when I was studying engineering but I also took several art classes just because I like them. One of my art teachers asked everyone on the first day, “Why are you taking this class?” That was my answer, boy was she confused. 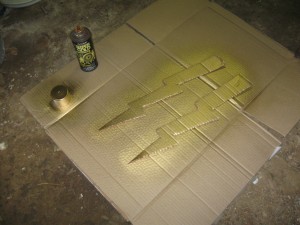 The first thing to create was a raincloud with lightning. I cut the parts out of an old box and painted them in the basement. We had an argument about whether lightning was silver or gold. I decided on gold and after my Thor demonstration Paul agreed. When the paint was dry Paul and I assembled the cloud and then mounted it on a wire in the front window. I added some raindrops for the “raining” effect and that part was done. 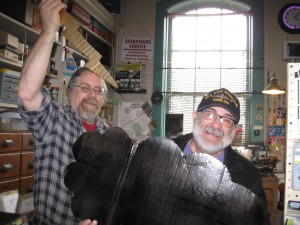 On to the flamingo. I made him an umbrella made out of tag-board and a wood dowel, painted black. That looked pretty good, but he was still missing something, He needed a raincoat. I made him a yellow one made out of construction paper and added a rain hat to top it off. Mary Anne showed up to check it out, and offered up some blue glass stones to be the puddles the flamingo was wading through. With that it looked pretty good, plus we were out of time and as I put it in another of my sayings, “You know the job is done when you’re out of time”. 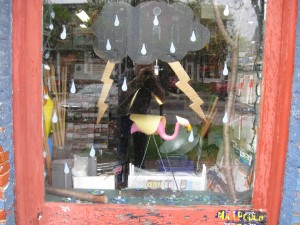 And speaking of time, I’m about out of it now, so this post must be done, at the Old Hardware Store…