Way back in the beginning it says in the Good Book that the apple was Adam’s downfall, and if it would have been me in the garden, I wouldn’t have stood a chance. I grew up having two apple trees in our back yard in Chagrin, and I’ve always liked eating them right off the tree. Of course when you’re a kid, you don’t limit yourself to just eating them. There are always apple-wars, when you divide into teams and pelt each other with apples that you pick up from the ground (don’t let my Dad catch you picking them off the tree to throw, he’ll kill you!). This usually came early in the year when the apples were still too green to eat (no fair pretending that you couldn’t tell that you just threw a “green” Black Walnut from the tree that grew next to the apples, they really hurt!).

It seems that I’ve always loved apples, and last week was our biennial Applefest. I say biennial because we don’t have it every year, we may not have it every other year either, it just depends on when we have enough apples. Apple trees usually alternate between a heavy and light crop every other year. Last year we had about two apples on the entire tree, so sure enough this year we got a boatload. Applefest doesn’t consist of just eating apples, we make cider with an antique apple cider press that we bought a few years ago. It’s quite a process, first you have to pick enough apples, using the long apple picker on a pole (also an antique, although we still sell new ones at the store). Wash and sort the apples and then into the press. The cider tastes better if you have different types of apples to mix, and as our property was an orchard years ago, we have our choice of several different trees. Don’t ask me what they are called, they must be heirloom varieties, because I can’t recognize any of them. They are just the “green, sour, hard ones”, the “little, sweet, red mushballs, and the “red and yellow mottled ones”.

Once they are ready for the press, you feed them in the top while someone cranks the big wheel like Hell. This is where it comes in handy to have a few “young bucks” over, as I get tired pretty fast. The machine has a grinder/crusher that shreds the apples before they fall into the pressing bucket, and then when that is full, you slide it over to the other side where it’s under the big pressing screw. Then you turn the screw handle, first by hand, then with a 2×4 cheater bar, and out of the press runs the nectar of the gods. Fresh apple cider is very different than what you get at the store, and even the stuff you get at the orchard has to be pasteurized these days. 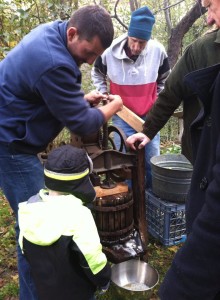 If it sounds like a lot of work, it is. That is why we always invite over the kids, their families and a few friends. “Many hands make light work” as they say. We had fresh cider, homemade chilli, and hot dogs cooked over the fire, it was a great way to spend a Fall afternoon. Now the press is washed up and put away, until next year (or the year after). So go out and get some fresh apples and cider while they are in season, and I’ll see you soon at the Old Hardware Store.