Why are My Coat Pockets Full of Snow?

As I look out the front door of the old hardware store, it looks like I’m trapped inside one of those snow shaker balls. The weatherman said we were supposed to get less than one inch today, but we have gotten about 6 so far, and it’s only noon. Is it just me or does it seem like the last couple Winters have been pretty brutal. 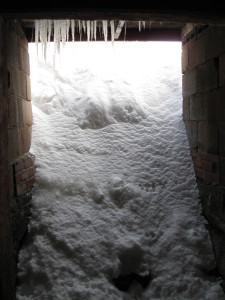 Don’t get me wrong, I remember a couple of doozies in the past. Ask any Ohioan over 50 and they will tell you about the winter of ’78. I remember it well. In one big storm the wind pushed an about 80′ pine tree over onto our next-door neighbor’s house and when he called the insurance company they asked him how big is the hole in your roof? To which he replied, “Which one?” One of the reasons I remember the winter of ’78 is because that was when I was taking driver’s ed. I learned to drive at night during “traveler’s advisories”, don’t worry we had a great snow car, it was a ’74 Valiant, I only ditched it twice. I’m sure they wouldn’t allow that these days, but I have never been afraid of snow driving since.

The coldest temperature that I remember was in about 1995 (give or take). I was working at the mill at the time and they forecast a real cold snap. I decided to top up the antifreeze in my truck and as I was working outside my hands got numb so fast that I could hardly get the radiator cap off. It was -13 degrees then, when I got ready to go to work in the morning it was 23 below. My reliable old Wagoner started after sitting out all night, but just barely. It had an old-fashioned carburetor with a choke and an accelerator pump, so I could pump it to get it started. Only about one third of the guys made it work that day, everyone else’s cars just wouldn’t start. We had every heater in the plant running, and the temperature inside was 25 degrees.

The next time that we had real cold like that wasn’t ’till last year. We had several “Polar Vortex” events (who made up that name, anyway?) where the lows were below minus 10. As I mentioned before, we had frozen pipes both at home and at the store, and one night at 12 below I got a call from our tenant, who said the the furnace in the upstairs apartment had died. I went up there at about 2 AM and it took until about 4 to get the furnace running again. Why does your furnace always quit during the coldest time of year? Murphy’s Law I guess.

This year seems to be more of the same. First we had snow, then ice, and now bitter cold. What is the reference to in the title of this missive? The other evening my propane company called to say that they tried to deliver propane to our home, but were afraid of getting stuck in the driveway. I’m not sure what he meant, I hadn’t had any trouble getting out with my Jeep (well, a little trouble). Anyway he sent me back to the tank to see how much propane we had left. I said no problem. Little did I know that the snow out by the tank was knee deep and the tank had about two feet of snow piled on it. I got it cleared off and luckily we still had propane, but when I checked my coat pockets later, they were both full of snow!

I guess that it’s all just a matter of perspective. I went to the Amish meat market the other day and the girls said that it was very cold out, but wasn’t it pretty? They were sure that it was the last cold snap of Winter and Spring was right around the corner. I sure hope so!