Up to the Cabin

Sorry that I haven’t been able to write any updates lately, but we have been very busy with post-Christmas activities. One of those involved a mini-vacation to New York. Our middle son, Chad and his wife Kate just purchased a cabin in New York state, near the ski areas around Chautauqua. They invited us up over New Years, and we had a great time there over the weekend. 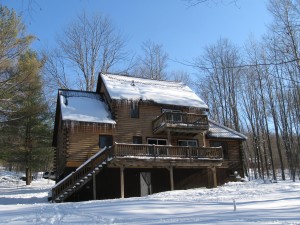 The cabin is a cool log-style house with two bedrooms and a loft and can sleep several people. Our youngest, Shawn and his wife Amy and the grand children also came up. There were tons of snow in the area and we had a lot of fun out playing in it. Folks sledded, skied, hiked and even showshoed! 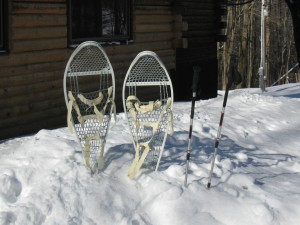 You see Mary Anne had said over and over that she would like to try showshoeing so that is what she got for Christmas. I found some well made army surplus snowshoes for sale at the last gun show that I went to so I snapped them up for her present this year. Let me tell you that it’s pretty difficult to carry a big set of snowshoes around the crowded isles of a gun show, I almost ended up clocking a few people! After I finally made it home, I also found out that they are pretty hard to wrap. I finally had to make a custom box by cutting down a snow shovel box from the hardware store, and using almost a whole roll of wrapping paper. 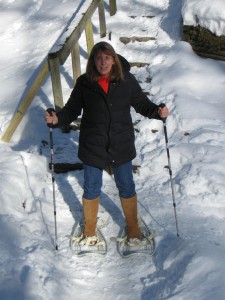 Mary Anne had a blast with her new snowshoes and I even tried them myself. It’s not too hard as long as you are careful not to step on one shoe with the other. If you do, you’re taking a header! They really work pretty well in deep snow. Hopefully we can get back up there to do it again sometime. Even if it is not until Summer, it is really a very scenic area and I’m sure that there are some great hiking trails up there. Well, for now, it’s back to work, at the Old Hardware Store…