Getting Stung! The Power Show, A Family Affair

Too Fast For Me!

Last week we talked about the Historical Engine Society’s annual Antique Power Exhibition. I wanted to take up the Hill Hardware mini-truck to display, but before it could go there was a little matter of its speed to attend to, it’s way too fast!

The Hill Hardware delivery truck is a 1970’s Sharp mini car, that is styled after the Model T Ford. It has a 5 horsepower Briggs and Stratton engine in the back, that drives a belt to the transmission. That gives you one speed, forward or reverse to the drive chain that goes to the rear axle. That was the problem. The one speed that you get, even with the engine just idling was way too fast. The car has loose steering, and only rudimentary brakes, so piloting it around the power show, dodging steam tractors, strollers and running little tykes can be exciting to say the least.

I got the idea to change the rear axle ratio, which is the simplest way to slow the car down without having to re-engineer the whole drive-train. I ordered a new sprocket, a 40 tooth to replace the standard 23 tooth, and some new drive chain, as the existing one would be too short with the new, larger sprocket. I then had to take the rear axle out of the car to do the change, which wasn’t too hard. I unhooked the drive chain, after cleaning about 40 years of accumulated grease off of it. Then I put the back of the truck up onto jack stands to hold it off the ground and then unbolted the axle bearings that mount it to the frame. It turned out that the rear drive sprocket was welded to the axle and could not be removed (not without a lot of grinding at least). 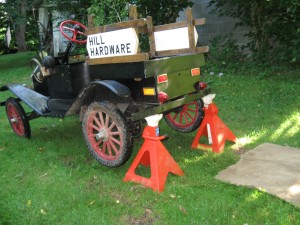 So I brainstormed for awhile to see if there was another way to do it. I’m in luck as fixing things with what was at hand was what I had to do regularly in the factory. So I figured that if I couldn’t remove the existing sprocket, I might as well use it to mount the new one. The new sprocket had an oversized hole in the middle, so I stood the axle on end and set the new sprocket alongside the old one and centered it up with a set of plain old inside calipers. Then I clamped it so that it could not move with two sets of vice-grip pliers. I wanted to use about half a dozen bolts evenly spaced around the gear to hold it tightly. So I counted the teeth and there were 23 – oh well (for those of you not into math, 23 is a prime number and you cannot divide it evenly by any other whole number). I decided to use 6 bolts and space them as evenly as I could. Then I measured the drive roller diameter on the chain. That told me what diameter of bolt to use to get a snug fit in the grooves of the sprocket. I got out my transfer punch set and selected the same size punch to get the correct distance for drilling the center of the mounting holes and marked the drilling spots. 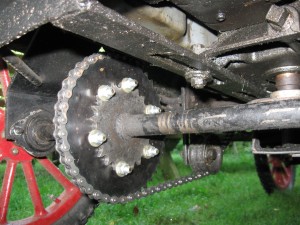 Then on to the drill-press to drill six 5/16th holes in the correct spots. The gear was hardened but by drilling slowly with enough oil, it drilled just fine. I ran to the store to get some grade 8 high strength bolts and then bolted the two sprockets side by side. The sprocket was only about 1/4 inch thick, so the side offset was small enough that the available flex in the drive chain would allow it. I fitted up a new length of roller chain and marked it for size. Then I used my grinder to cut it to the right length. I fitted it on with a new master link and adjusted the idler roller, perfect! 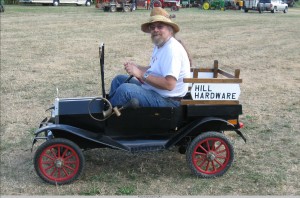 I started the car and gave it a test drive. The new final drive sprocket should have slowed the car by the ratio of the old number of teeth by the new number or 23/40 = 0.575. That should have slowed the car by almost half, and that seemed about right. It was much easier to drive and if you wanted to go faster, you could always open the throttle a little and just speed up the engine. We took the car to the show on Sunday and it drove great. I even let my friend Scott drive it around as I didn’t have to worry as much about it getting out of control. Scott had a blast and we got a little free advertizing for the Old Hardware Store…