The Art of Wood Drilling Puppies!

I was drilling some holes this morning for one of my projects, and it occurred to me that we haven’t talked about one of the most unappreciated items in the average homeowner’s toolkit, the lowly drill bit. Specifically we will cover drilling metals, drilling wood while it can be similar and even utilize some of the same bits, is a different animal entirely. Most metal drilling bits are similar to each other, but they do differ in size, type of shank, and most importantly, the alloy that they are made of. 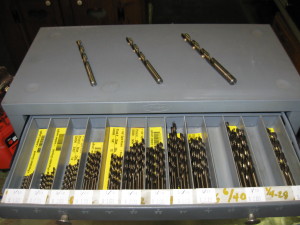 Drill bits are basically a set of small chisel points that are mounted on the end of a spiral shank. These points do the actual cutting when the drill spins and is pushed against the material being drilled. To make the drill cut, you have to push on it fairly hard, this causes friction and heat. These are the things that a metal cutting drill bit has to contend with. This makes the material that the drill bit is made of and the process used very important. Originally they were made of carbon steel that was hardened and tempered (or drawn). These bits worked fairly well but if they were run too fast the heat generated could draw the temper out of them and they would become soft and stop cutting. You probably won’t run into carbon steel metal drills very often anymore, but I covered them to lead up to their replacement, high speed steel.

High speed steel drills are the most common used today, and as the name implies the main difference between them and carbon steel drills is that they can be run at higher speed, thus hotter, and still cut. The difference is the type of steel that they are made of, which is a different alloy than plain carbon steel. High speed steel drills will work for most metal drilling, unless the metal being drilled is unusually hard or tough. The next better drill bit available is cobalt alloy. These will stay sharp longer when drilling hard steel, and tough steels like stainless. They are a little more expensive of course. The best drill bits we offer are called high moly, short for molybdenum. Which is an alloying material that makes the bit harder and more wear resistant. These super bits cost more, bit are worth it for tough jobs. 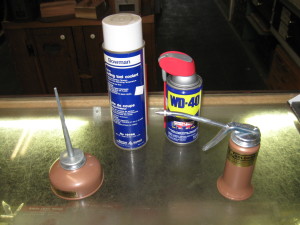 The other thing that is important for metal drilling is technique. Because the metal is hard, a lot of pressure is needed to cut into the metal. The main thing is to push in a straight line, so you don’t try to bend the drill bit. If you do, the bit can break. The next thing is to go as slow as possible with your drill motor speed, this will keep heat from friction to a minimum, which will keep any bit sharp longer. Also as the hole you are trying to drill gets bigger, the wider the chisel points on the tip of the drill become, it becomes impossible to push hard enough on the drill to make it cut. This is why it is often advisable to drill a pilot hole of a small size and then enlarge it with a bigger bit. Some very large holes may require drilling in several steps. The last thing is to use a lubricant. They make special cutting fluids for drilling, but any oil will help. I keep a squirt oil can full of plain motor oil next to my drill press for just this purpose.

That about covers it for metal drilling, next time we’ll cover wood bits, which come in many more types and sizes. All are available, at the Old Hardware Store…