Stuck on You Tools of Destruction

The Age of Steam 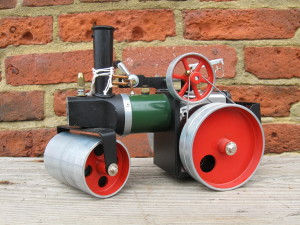 When you consider the technological ages of man, as a baby boomer I am sure I grew up in the age of oil, and who would deny that we are now firmly in the computer age. But about a century and a half ago civilization entered what should be known as the age of steam. Great steam engines powered the factories of the industrial revolution, locomotives that crossed the continents and steam ships that traversed the globe. What child was not transfixed by that magic and want to replicate it at playtime, thus model steam toys were born.

Working model steam toys were first produced in the area of Nuremberg, Germany in the 1880’s, and were known as Nuremberg engines. The toymakers of France, Great Britain and the United States were soon to join in the manufacture of steam toys. Steam toys consisted of stationary engines like the ones used in industry, often driving miniature factory tools, steam rollers, traction engines and steam locomotives were produced also.

How did these models work?, just like the real thing. The boiler had to be filled with water and a burner usually filled with alcohol was lit and placed under the boiler. When steam was up, a turn of the flywheel and off they would go. What lucky child would not want to wake up to a shining model steam engine under the Christmas tree. Up until the 1930’s steam toys were very popular, but with airplanes, automobiles and electricity becoming commonplace, steam toys began to fade in popularity. They never completely left the scene, however, and are in fact still produced on a limited scale today. Wilesco, of Germany, Mamod of England, and Jensen of the United States, all companies that can trace their roots to the period before World War 2, still produce classic working steam toys. Model steam is more of a hobby for adults these days, although children are still fascinated by it, If you are interested in seeing steam toys, stop by Hill Hardware, in Burton, where we still talk steam. . 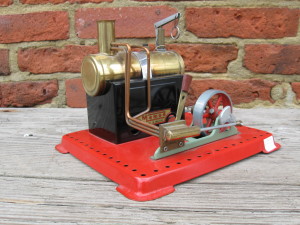