Spring is in the Air It’s Snowing On My Cheeseburgers!

Last week I gave you a teaser about this week’s topic, Steam! As most of you know, I love all things steam. I have many steam engine toys that I have collected since I was young. We sell them too, at the store. I love to go to the antique power show also and admire the big steam traction engines. I even looked into purchasing one a few years ago, however common sense along with the ridiculous prices that they bring convinced me that I didn’t really need to own one (plus you need a semi just to haul them around to the shows!). 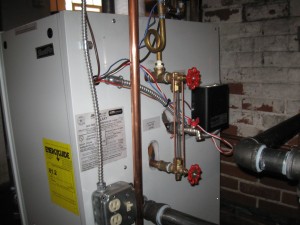 But there is one place that I did pay big money for steam. We just had to replace the steam boiler that provides heat for our cottage in Fairport Harbor. When we first bought the cottage I didn’t know too much about steam heat as we had always had forced hot air before. But I looked up information on steam heating systems and soon figured out that we had a single pipe steam system that dated from about 1910. That was about right for the age of the house, and although the original boiler had been coal fired. It had been replaced at some point with a gas fired newer one. 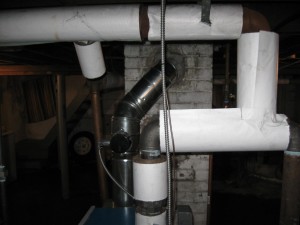 As I did my research I found out how single pipe steam systems work and it is fascinating. It was the first type of residential steam heating system that was common, and it is simple and efficient. The boiler has to be located in the basement, which is easy enough (except for getting it down there!). It can burn coal, gas or oil and produces the steam. The steam then rises naturally (like a hot air balloon) and travels through the insulated steam main that runs just under the basement ceiling. As it travels around the main pipe there are connecting lines that run through the floor to connect with the steam radiator upstairs. Once the steam gets to the radiators it starts to condense as they are not insulated and this heats them up quickly to provide heat in the rooms. Once the steam condenses back into liquid it runs back down the same pipe (it now takes up much less room) and back to the boiler. The only other device in the system are the vents. These are simple little mechanical devices (they look a little like art-deco rocket ships) on the steam main and the radiators. They are normally open to the atmosphere and give the air a way out of the system to give the steam room to pass. They have a heat sensitive spring in them and once all the air is out and the hot steam gets there, the valve closes to keep the steam in the radiator. It’s an elegantly simple system with no pumps, electronics or motorized controls, it’s all mechanical and reliable. 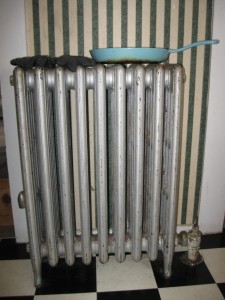 The only problem that we have had with it was that all the insulation had been stripped from the pipes by the previous owner. This allows the steam to condense in the cold main line in the basement and heated the basement to about 80 degrees before you got any heat upstairs. It proved to be simple and relatively cheap to fix, I just had to measure all the lines and order special high temperature insulation to fit it. It was pretty easy to put it on and tape it up. This year, however the old boiler had reached the end of it’s life. The burners that provide the flame had completely rusted out, and then the boiler itself developed a leak. I looked into repairs, but it would have been half the cost of a new boiler. So we bit the bullet and had a new one put in. If it lasts as long as the last one, I won’t be the one to have to worry about it next time. 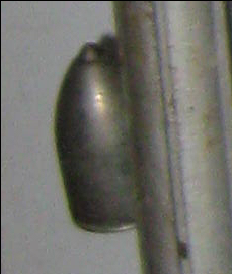 The new boiler is now working well, so we have plenty of heat at the cottage. As a matter of fact we’re heading up there right now, so I’ll see you later, at the Old Hardware Store…