Camp Cookin’ It Couldn’t be Planer

Oh, I’m sure that you all think that being a hardware store owner is a pretty cushy gig.  Just sit behind the register collecting other folk’s money all day and then loading it all in a wheelbarrow for the trip to the bank.  Well, let me tell you that sometimes it’s not all it’s cracked up to be.

The other day was a case in point.  We have customers that have charge accounts.  They can be handy, especially if you have several employees out on the road that may need supplies, but you don’t want to give them all a credit card.  We just keep track of their spending all month, and then at the end of the month we add it all up and send them a bill.  The system works pretty well, but it can be a little labor intensive.  First I have to total up the bills for each customer.  Then my wife, Mary Anne, enters all the information on her computer and prints out the statements.  After that it’s back to me to match up the statements with the bills and staple them together.  Then I get to fold them up and put them into envelopes.  Lastly I seal them up and put on stamps. 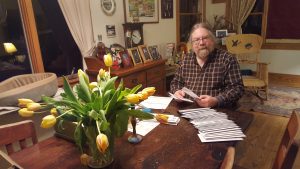 It sounds like a lot of work, but it’s really only about an hour to add them, up, an hour on the computer and then an hour to stuff them.  Unless, of course, my other employee decides to help.  Usually I end up doing the envelopes at home on the dinner table.  There’s lots of room and I can just knock it out some night after supper.  The other employee that I’m talking about is one of our cats, James.  James you see, loves to get involved with any project that you’re trying to get done around the house, especially on the dinner table.  You name it, wrapping presents, paying household bills, sewing or his favorite doing the store bills.  This time he helped by walking over the paperwork at first, and then laying on it.  I chased him off of it, and then he settled into the box we use to transport everything around. 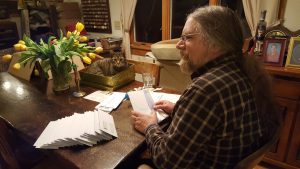 Once I finished I had to fake him out by leaving the room to get him out of the box to pack everything back up.  Like Rodney Dangerfield, “I don’t get no respect”, at The Old Hardware Store…