This week we’ll be taking a walk down memory lane, or perhaps “trail” would be more accurate. When I was growing up in Chagrin Falls, our house was on a small lot. It backed up to the woods by the Chagrin River, though, and there were no houses behind us. At the rear of all the lots on our side of the street, there was a little strip of woods ending in an about 40 foot steep hillside down to the river’s edge. You notice that I didn’t say “bank” as there was no easy way to access the river. You see, we lived right upstream of the old Chase Bag paper plant, and there was a large, about 4 foot diameter, pipeline that ran right along the edge of the river to bring water down from the upper reservoir at Whitesburg. It was possible to get up on top of the pipe and walk on it up and down the river, but heaven help you if you lost your balance and fell in. There were very few places where it was possible for a little kid to climb back out. 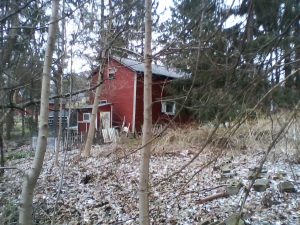 This left a long thin woods for all of us kids to play in when I was little. The best part was right behind our next door neighbor’s house. First they had an old carriage house that we just called the “barn” that they didn’t use for anything and so it was available to us kids for transforming for all sorts of activities. The loft was ours exclusively and used as a clubhouse and each Halloween as a haunted house. The ground floor was the site of our “stages”. There, much like the Little Rascals in the “Our Gang” comedies we performed various skits and plays for an appreciative (?) audience of the littler kids. I’ll never forget the time in the early 60’s that we decided to re-enact the Beatles in concert. The older boys “played” and sang their hearts out with their tennis racket guitars and trashcan drum set. I was the the only little kid that was allowed backstage as it was my job to hide in the tiny space between the sliding doors and change the 45’s (ask your parents) on the small record player that they had hooked up in there. I still remember the terrible electric shocks that I would get if I accidentally touched the metal parts of the record player. Apparently the wiring in the barn had a reversed neutral, a great way to electrocute someone, but we were blissfully ignorant – ah youth! 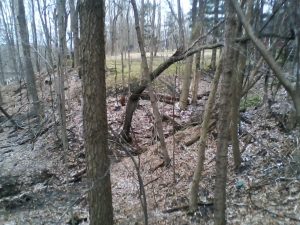 Behind the barn there was a trail down the hill to the creek. It was actually more of a storm sewer ditch, as it only ran well in the wet weather. But it was perfect for splashing in, and making dams and best of all racing sticks and sardine can boats. There was also a bridge the neighbor put up across it made out of two old car ramps from the Model T days. It was pretty rickety though, and instead of using it to cross the creek with dry shoes as he had intended, we usually just splashed through the water. It was good for dares though, as in “ I dare you to go across the bridge”, and then pelting the helpless kid with mud clods to see if we could get them to loose their balance. 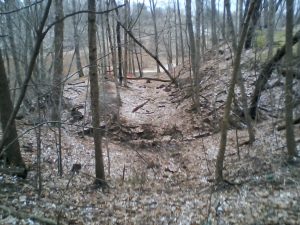 On the other side of the creek the ground went up into a shale hill that I somehow dubbed “Muddy Hillside”. The name probably came from answering my mother’s questions about where was I playing that I got so dirty. Muddy Hillside was the perfect place to play. There were three sides to climb up to get to the top. A gentle slope with a trail, a steep hillside that you could go up on all fours, and was perfect for racing your Tonka Jeeps down, and a very steep back hill down to the river. It was so steep that you had to kind of run down a little ways as it was too steep to stand on, and then brake your decent by grabbing a hold of one of the little trees that were somehow growing out of the bank. Once you got to the bottom, there was no getting back up that way, you had to work your way back up the creek bed and then go up the less steep side. 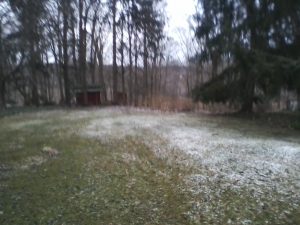 I was at my Mom’s house yesterday and when I was walking the dog in the back I looked down into the woods towards Muddy Hillside. It’s all still there, about as I remembered it, just a little smaller now and sadly looking a little unused. All the trails are grown up and the undergrowth that we kids kept trampled down is all grown up between the big trees. I stopped and took a couple of pictures, and came up with my idea for this article. Time passes, things change, Chase Bag closed and is now mostly torn down. My Mom keeps getting notices from the zoning department about the impending development of the old industrial site into condominiums. I suppose that it’s only a matter of time before some unknowing bulldozer driver comes to level out the site to “improve” it. We can’t stop them as we don’t own it, although in a childhood common-law kind of way it will be always be ours in a way the developer will probably never understand. It’s a kind of sad day here at the Old Hardware Store…