A Christmas Mess! On The Cape

Well, I said last time that we were done with our vacation story, I lied, well, kind of. Mary Anne and I did actually leave Cape Cod after we cheated death on our stormy whale watching trip. We stopped on the way home, however and had one more activity on our itinerary. This one also involved another of my favorite things, steam trains! I’ve written about steam trains before (see “Steam’s Up” in the blog archive) when we took a trip to Cass, West Virginia. This time we stopped at the Strasburg Railroad in Strasburg, Pennsylvania. 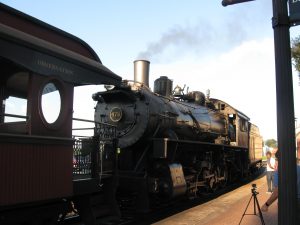 The Strasburg railroad is a tourist railroad, like several others in the Midwest. Strasburg is unusual, though, as it uses steam locomotives to haul vintage train coaches on its various excursions. The engine used to pull our train was #475, an M-Class engine built by Baldwin in 1906. Baldwin built an amazing 70,000+ locomotives of various types starting in 1825 until they went out of business in 1956. To me it’s amazing that many of these locomotives are still up and running well past their 100th birthdays.

This type of locomotive was, of course, powered by steam, produced by burning coal to heat water in the boiler. The steam then traveled to the two cylinders, one on either side near the front of the engine. These cylinders then drove the main driving wheels via connecting rods. On #475, there are 4 pairs of driving wheels, making 8 total. With 4 leading wheels, and none following, this makes it a 4-8-0 locomotive. It would have been considered a medium sized, general purpose model. Engines came smaller, and amazingly much larger. 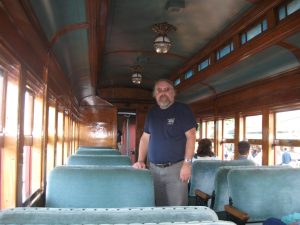 As the crew got steam up, we boarded the coaches, and were greatly impressed with the great quality of all the restored cars. Beautiful woodwork with polished brass hardware, stained glass and other luxury details. Now this was the way to travel! The upholstered seats were cool too, they could be flipped back and forth, making it possible to travel facing either forward or backward, or allowing folks to face each other for conversation, how civilized. 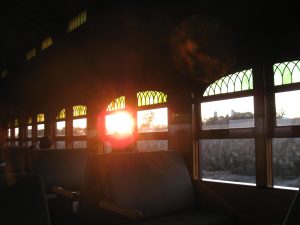 We had a great trip, watching the sun set over the farm fields. We made it back to the hotel in time for a late supper, and then to bed early. You see, the next day we had to finish the drive home, to the Old Hardware Store…