I’m Dreaming of a…

Today, Saturday the 23rd will be the last day the hardware store is open before Christmas (sorry last minute shoppers) this year the 24th is Sunday and we’re always closed anyway. We’ve only had one good snow this year so far, so I was worried that we’d have a green Christmas this year. So imagine my surprise when the white stuff started coming down this morning. 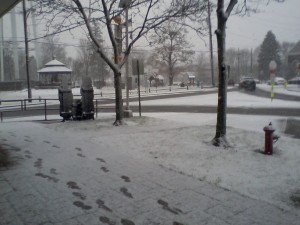 It has been snowing pretty good for the last couple hours. I checked the forecast, they said it was going to stop later, but then start again tomorrow night. Weather forecasters are not usually known for their infallibility. I don’t think that the hardware store would still be in business if I only sold customers the right parts about half the time. Of course I don’t (usually) have the foibles of Mother Nature to contend with. 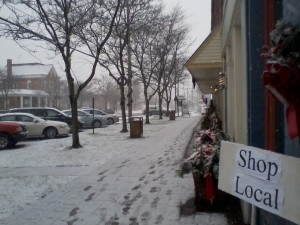 I don’t mind a little snow, especially at Christmas, but here in the snow belt there’s sometimes no such thing as a “little” snow. Back in the days before detailed storm forecasts we used to just watch the weather on TV. We’d take the snow forecast that they gave for Cleveland and double it for my childhood home of Chagrin Falls. Now I live in Welshfield, and we’re right on the lower edge of the snow belt. Burton, where I work always gets it, but often as I drive the five miles South to home, the snow kind of peters out and there we’ll have little or none. Unless the wind is really blowing, in which case it will be about the same as Burton.

I don’t really like driving in the snow, but I’m pretty used to it. Talk about Winter storms and old timers will inevitably bring up the dreaded winter of ’78. During the winter of ’78 I was taking my driving lessons. Imagine learning to drive at night, during traveler’s advisories. I only ditched the drivers ed car twice. I didn’t like it but I sure learned to drive in the white stuff. 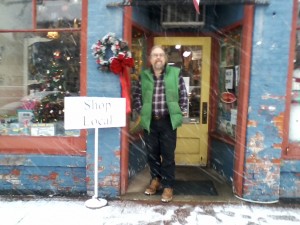 Well, it looks like the snow is letting up a little now, but you never know. You had better be ready for more, at The Old Hardware Store…