I’m Dreaming of a White Christmas

I was just playing “White Christmas” here at the store on our vintage Musette player piano. I’d play some more, but it’s the only Christmas carol that I have a piano roll for. We have some snow on the ground now in Burton, but we’ll need some more before “the day”. Of course, snow means the chore of clearing it away and that brings us to snow shovels. 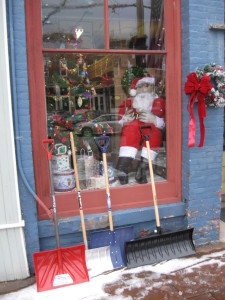 Having the right snow shovel to fit your clearing job and shoveling style is an important part of the job. The most basic type of shovel is the flat metal type best suited for picking up the snow and throwing it up in a heap. They are the best for cutting into deep sticky snow drifts and picking up big blocks of snow to move them aside (careful they can be really heavy!). A trick that helps when trying to shovel sticky snow, by the way, is to spray the blade of your shovel with silicone spray, this magic lubricant will help the snow slide off the blade instead of sticking.

If you can just push the snow instead of lifting it, shoveling can be a lot easier. Regular shovels don’t push well though, Specially made “pusher” shovels are more curved and can be used to push mounds of snow across the drive instead of lifting it. They work the best on paved surfaces. They are made of plastic and metal and come in several different widths. Picking one that matches your sidewalk width can speed up the job a lot.

They now make general purpose shovels that are a cross between a flat shovel and a pusher. They are made of plastic and while they only make a fair pusher, their dished sides excel at moving large amounts of fluffy light snow. Speaking of plastic shovels, they come both with and without a metal wear edge along the bottom. A wear edge will make a shovel last a lot longer when being used on paved surfaces that tend to wear away an unprotected plastic edge like sandpaper. On the other hand, a shovel without a metal edge is better for delicate surfaces that you don’ want to tear up such as wood decks or textured concrete walks.

Something fairly new on the market are snow “sled” type shovels. These have a large scoop shaped blade and a large two-handed loop type handle. For moving large amounts of snow they cannot be beat, ’cause you don’t have to lift it. Just push the shovel into the snow until it is heaping full, then tip it back and slide it over the snow to where you want to put the snow, then just turn it completely over to dump the snow. The other beauty of this system is that at the end of a snowy winter you can run out of space to pile snow. A snow sled can slide the snow out into the yard where there is still room to dump it.

One thing most snow shovels don’t do well is deal with ice. Every one who has cleared snow has tried to chop ice away with a snow shovel. The result with a metal shovel is usually bent corners on the blade, with a plastic shovel, a trip to the store to get a replacement. The answer to this problem is actually another tool, appropriately enough called an ice chopper or scraper. These have a sturdy, flat ended blade that is just the ticket to clear ice. Used vertically in an up and down manner to break up the ice and then at a lower angle to slide under the ice and lever it loose.

Once the majority of the ice and snow are cleared away a little of the ice melter we talked about a couple weeks ago will easily melt off the rest to give you a clear, safe path… Until next time.